Snowene White Cleaner was a Cherry Blossom branded product manufactured by the Chiswick Polish Co Ltd. The period of this product’s production is unclear but it is likely to be post 1913. Snowene was definitely available in 1930 and there could well have been some rationalisation when the company began to cooperate with the Nugget Polish Company Ltd from 1919.

The company changed its name from Chiswick Polish Company Ltd to Chiswick Products Ltd in 1929 when it amalgamated with Nugget. There is no clear evidence that Nugget white cleaner was dropped in favour of Snowene on amalgamation (or vice versa), indeed the company maintained both the Cherry Blossom and Nugget polish brands so it is possible both white cleaner products were available simultaneously. Similarly, Wren’s similar Puwite product was also under the Chiswick banner in 1938. We know the Puwite product came to Chiswick with the Wren’s acquisition so it is entirely possible Chiswick’s had three differently branded white block cleaners in their portfolio simultaneously.

Made in a similar style to Pickering’s original ‘deep well’ Blanco it was supplied as a refill boxed, as well as a tinned product complete with sponge. 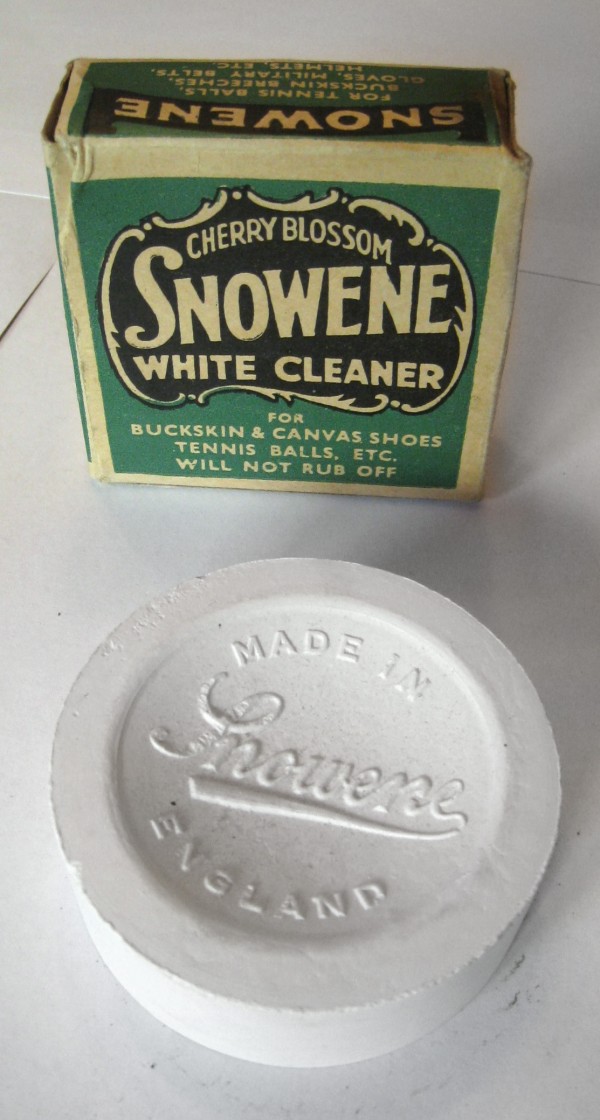 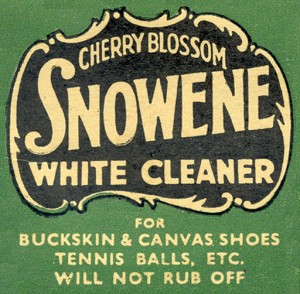 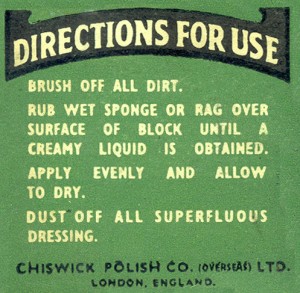 On the label
Cherry Blossom
Snowene White cleaner
for Buckskin & canvas shoes Tennis balls, etc.
Will not rub off

And on reverse:
Directions for use: Brush off all dirt. Rub wet sponge or rag over surface of block until a creamy liquid id obtained. Apply evenly and allow to dry. Dust off all superfluous dressing.
Chiswick Polish Co. (Overseas) Ltd London, England 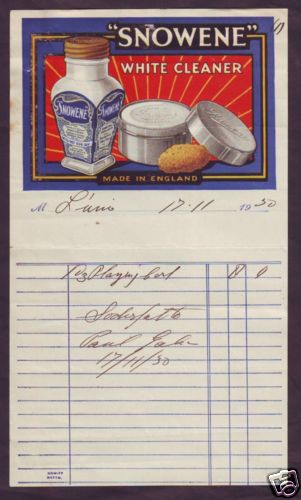 A full colour advert on the top of a 1930 dated bill shows the cake in it’s tin with sponge alongside and mirrors the Pickering product even down to the simple ‘Snowene’ embossed on the lid! The tins were made by the company in their extensive Chiswick works. The product was also available in liquid form supplied in a distinctive screw-capped bottle.