Below is an article from the “Watford Observer” in 1914 detailing a visit to Blyth & Platt’s works on Greatham Road, Bushey, Watford. The writing style may be contrasted with that of “A Day at Day & Martins written in 1842. Gone is much of the verbosity and relish of the English written word but still has curious punctuation and a reluctance to use the full stop. Rather irritatingly the article doesn’t mention how Mr Rowe’s company came to be called “Blyth & Platt”. Ah well, something for future research!

A local firm with a world-wide business.

How the “Cobra” polishes are made.

A peep at the works. 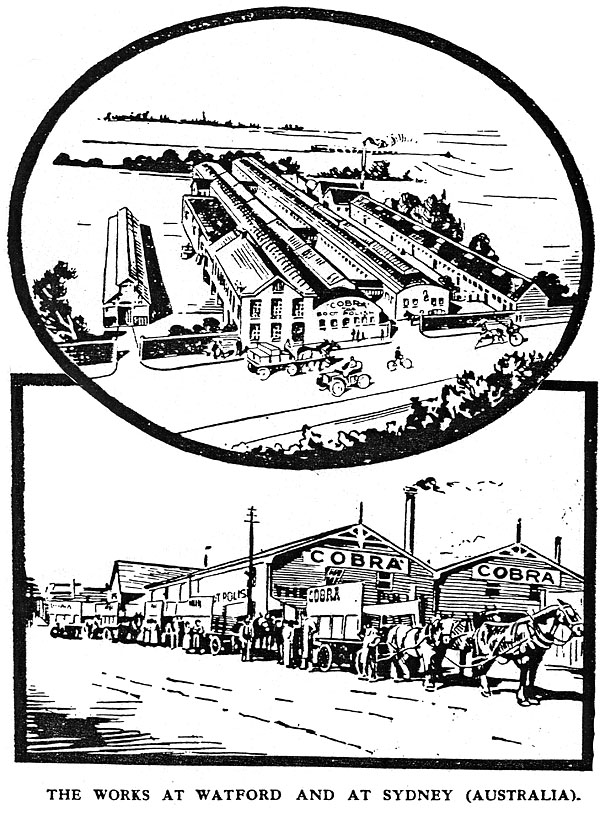 No small part of the romance of our life in the 20th century lies in the planning, organization, and development of great industries and in the building up of huge businesses, until their names are known, not only in every village and town of these Islands, but in the most distant parts of the British Empire. we have in Watford an instance of this imperial way of conducting business. Twenty years ago the firm of Messrs. Blyth & Platt was established in Altringham, Cheshire; eleven years later the works were removed to Watford, and now the “Cobra” polishes are in daily use, not only throughout the British Isles, but in almost every part of the globe in which white men have settled. The more important lines are the boot polish, furniture polish, floor polish, and metal polish. Hundreds of thousands of tins are used annually in India ; the polishes are bought eagerly in Rangoon, Siam, and the Straits of Settlements; further east still they are found in China and Japan; travelling down the pacific we find them in Australia and New Zealand, and even in far-flung little isles that are considered unworthy of mention on any save the largest maps. In South-East Africa, Egypt and the West Indies, in Canada and in South America, that land in evolutions, the “Cobra” has been firmly established in the homes of the people; and returning to Europe we find ir known in Spain, France, Germany, Russia, Austria, Belgium, Holland, Norway, and Sweden, and even used in large quantities in Romania and the Balkan States. Th “Cobra” in fact, has coiled itself round the globe; and by another name, the polishes are known in lands where the very word “Cobra” or “snake” is anathema of the natives. From all parts of the world are gathered the raw materials, and to all parts of the world these are returned as polishes manufactured by British labour.

We have been afforded a fascinating glimpse of the inner working of this great business, which was founded by Mr. G. W. Rowe. After his death, Mr F. J. Brown, one of the directors (who is vice-chairman of Bushey council), became general manager. Mr Frank Rowe (a brother of the Founder) is Secretary and a member of the Board of Directors. It is interesting to note that Mr. Rowe has immensely increased the sales of the firm in continental towns. He speaks both French and German and has travelled to many parts of Europe, stimulating the activities of the firm’s agents and putting in operation extensive advertising campaigns. He has visited almost every market worth considering, and was actually in Constantinople a fortnight before was broke out between Turkey and the Balkan Allies. He was much impressed by the number of boot-blacks in that city, and of the splendid shines they obtained, even though their operations would be thought very leisurely over here, and their charge is usually 1½d. Mr. Rowe is also an artist of considerable ability, and his hand is seen in the attractive designs and the dainty character of the outfits sent out by the firm. The new catalogue of the “Cobra” polishes, by the way, is a very tasteful and artistic booklet. It extends to about sixty pages and treats the origin of the firm, its growth, its various specialities, and the many awards it has secured.

Some years ago when the company desired new worlds to conquer, Mr E. B. Rowe volunteered to establish works in Sydney, Australia, where there was a tariff of 22½ per cent. on imported polishes. Messrs. Blyth & Platt were the first firm of its kind to build a factory in Australia, and before long their business in the Antipodes exceeded all expectations, and rivals began to follow their example. The wisdom of the move is also shown by the fact that shortly afterwards the tariff was raised to the practically prohibitive figure of 37½ per cent. Later, Mr. Herbert Rowe went out to assist his brother by taking over the factory management. Evidence of the rapidity with which the business of the firm is increasing is afforded by the fact that even the increased output last year was equal to the total manufacture eight years ago.

Mr. Brown accompanied a representative of the “Observer” in a tour over the factory, and genially discussed the work and explained processes. The first room to be visited contained sacks full of wax, some of which had come from South America and had cost £150 a ton. Passing to another storage room Mr. Brown opened a sack containing a special wax which is probably unique in this country. it is used in the furniture polish. He pointed to other specimens of wax. There was bees was in abundance, and a host of other kinds. “Some people,” remarked Mr. Brown, “have a notion that you can make polishes for nothing. I can assure you that when, as we do, you manufacture polishes scientifically, the cost of your raw material is exceedingly heavy.”

We passed next into a chemist’s laboratory, where the wax is tested to ascertain if it is absolutely pure. In the making of a polish the wax is mixed with turpentine (and certain other spirits in special cases), and heated to a temperature, which is a trade secret, at which – if calculations are correct- amalgamation takes place. The slightest adulteration of the wax upsets the calculations and spoils the mixture. 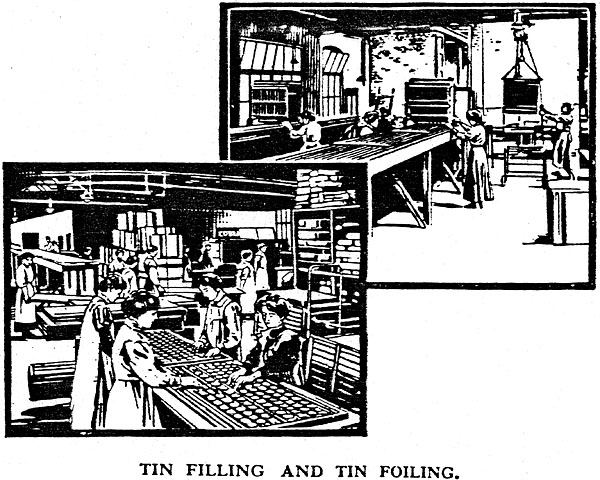 THE LABORATORY AND MIXING ROOM

The manufacturing room was next visited, and here by good fortune some polish was actually being made. No complex apparatus is required. There are five large metal pans (shaped like “coppers” used in thousands of homes on washing day), and three of these are used for black polishes and two for brown. In these is placed the wax and the spirit is pumped up from tanks in the cellar. The heating of course is done by steam; it would be impossible to use fires for heating the spirit. The mixture is stirred by means of a small motor, and glancing into the pan one saw the future polish swirling round in a black vortex. Asked “Is the process at all dangerous?” Mr. Brown replied with an emphatic negative. “Why,” he said, “its the healthiest thing in creation. If you had a cold in your head I’d guarantee that an hour over that pan would do it more good than two or three days in bed.”

Then we had a glimpse of the room in which cream polishes are bottled. Mr. Brown expressed the belief that creams are coming more and more into favour. “It is because of the very highly-finished boots of to-day. In the cream there are the same ingredients as in other polishes, but in a less concentrated form. If you have a delicate leather, once it has been properly treated, the cream is sufficient to keep it supple and brilliantly polished. A great deal of this cream goes to India, to which we send tons of polish each week.”

After watching the making of the polish we passed into a spacious well-lighted room to watch tins being filled. This was one of the most interesting in the whole tour of the works, for Messrs. Blyth & Platt use a patent filling machine invented by their Founder, Mr G. W. Rowe. The machines used by their competitors are cumbrous and have to be worked by two or three persons. With Messrs. Blyth & Platt’s patent nearly 20,000 tins can be filled in an hour by one employee. As will be seen from the picture which appears on this page, the machine in a way resembles a small water cart running on tram lines. It is wheeled down a long bench on which were placed over 4,000 tins. The liquid polish has to be kept at a certain temperature or else it sets and congeals in small taps, from which it spurts into the tins. Exposed to the air in an unlidded tin it sets very quickly, and ten minutes after being poured out it is in the form with which we are all familiar.

After glancing in a dyeing room, in which there were nearly £3,000 worth of empty tins alone, we passed into the making-up room, where a number of “hands” were busily employed putting tinfoil in the boxes. “The tinfoil,” Mr. Brown explained, “is the best method of preserving polish, though it is an awkward process, as it has to be done entirely by hand. And tinfoil is expensive too; we have to pay something like 2s. 3d. a lb. When I tell you that millions of the small penny tins have to be filled each year you can imagine what our bill for the foil alone amounts to.”

At the end of the third room is a warehouse, in which many of the foreign orders are made up. Mention has been made above of the great scale on which the foreign trade is conducted, and it may be interesting to note here that the picture which appears at the bottom of these lines represents a “Cobra” consignment of extraordinary dimensions. The gross weight was about 40 tons; the total number of tins and bottles was 700,560; and the total value was over £5,500. Nearly 50 railway lorries were required. But even these remarkable figures have been exceeded by Messrs. Blyth & Platt since this consignment was despatched.

After visiting packing rooms, storage rooms (in which over 153 different kinds of tins a re kept, for Messrs. Blyth & Platt manufacture polishes for quite a number of other firms), we entered the show-card department, in which are kept some of the beautiful “Cobra” designs in which the polishes are advertised. The greatest care is taken to ensure that the representation of the “Cobra” shall be absolutely accurate, and in India some of the charming pictures of the dusky maiden charming the cobra are so much prised that the natives steal them if afforded the slightest opportunity.

Passing outside we saw next to the fine electric light advertisement sign, and then examined the motive power of the Works. We saw the dynamo which lights the works and does the mechanical stirring of the turpentine and the wax; and the boiler (which resembles a railway engine without wheels) from which comes the steam for heating the building and also the mixture in the copper pans. We saw the dining room for the girls, who do not all go home for their mid-day meal (possibly one of the secrets of the success of Messrs. Blyth & Platt is the consideration with which they treat their employees), and finally, the great tanks in which the spirit is kept.

It is no small thing for a town to have in its midst an enterprising firm such as Messrs. Blyth & Platt, which has carried its name to the ends of the earth. In the comparatively brief space of 20 years a great reputation has been won for the “Cobra” polishes, and without doubt in this new year Messrs. Blyth & Platt can look to an era of even greater prosperity.

This article was kindly sourced from archives by Audrey Adams of the Local Studies Centre of Bushey Museum.